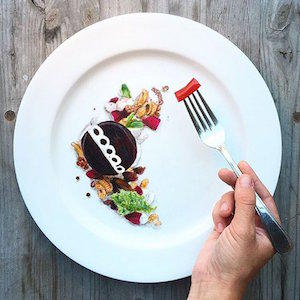 Last Updated on January 26, 2016 by Coppersmith

Instagram legend Chef Jacques La Merde is taking over Coppersmith!  Chef Jacques is Coppersmith’s first Guest Chef Food Truck Takeover and they couldn’t have picked a better chef!  For those of you who aren’t obsessed with Chef Jacque’s Instagram, here’s a little background.  Chef Jacques exploded onto the culinary scene via Instagram, with a penchant for all caps and posting haute cuisine made with decidedly non-haute ingredients like Doritos, Mountain Dew, and Miracle Whip.  The anonymous chef has had both the social media world and the culinary world speculating about his identity for almost a year,  he’s showing us the man behind the curtain January 28th.  And what is he doing immediately after going public?  He’s coming to God’s Country, South Boston.

The fun begins with a week-long dessert collaboration culminating in The Chef Jacques La Merde Food Truck Takeover at the end of the month.  From Friday January 22nd through Friday January 29th the restaurant’s menu will feature a special collaboration dessert co-created by Coppersmith Pastry Chef Craig Williams and Chef Jacques La Merde followed by a live food truck takeover on Saturday, January 30th.  The takeover will be open to the public beginning at 6pm.  Chef Jacques will be manning Coppersmith’s two food trucks and together with the Coppersmith kitchen team will be serving up his unique creations.  Reservations are recommended and walk-ins are welcome but based on availability.

Both Coppersmith’s and Chef Jacques’ Instagram accounts will be showcasing the fun with teasers and leaks for the upcoming week, and you’re encouraged to tag your own social media posts with #cjlmxcoppersmith everyone can follow along in the foodie fun.  We know we can’t wait to check it out!