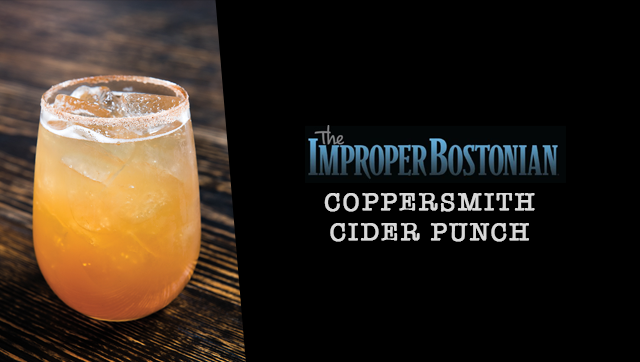 Last Updated on January 17, 2016 by Coppersmith

Taste: A classic marriage of refreshing cider and port cask-finished bourbon. There’s sweet from the cinnamon-sugar rim, heat from the chili liqueur. It goes down easy. Really easy.

Appeals to: Pretty much anyone. “I’ve talked people into it who drink Cosmos,” says bar manager Courtney Nunheimer.

The rest of the menu: Nunheimer had the neighborhood in mind. “The Southie community, they like what they like.” But she also wanted to introduce some new things. “We walk that line of craft and what’s known.”

The Digs: Thirty-four seats line the massive 138-foot reclaimed wood bar, and Nunheimer has her own walkup library of booze, stretching up to the soaring ceiling and bringing 99 bottles of beer on the wall to a whole new level.

Keep on truckin’: Coppersmith’s dueling food trucks have been squaring off on football game days—and there could be cocktail competitions on the way.